GODSON/ Even To Dawn {A Brief Introduction Part One}

In the beginning, there were three great forces.  They called each other by name: The Father, The Son, and The Holy Spirit.  And, all was good.

The Father, with The Holy Spirit; confer with The Son.  They say, “Let us make living beings; imbued with some of our power.  They will do our bidding; but, will have the freedom to choose:  a will to do, and, not to do.”

The Father; The Son; and The Holy Spirit say, “We will call this one, Lucifer; and, all his kind, we will call angels.  They will be our messengers, throughout Heaven; and all creation.”  And, all was good.

The Son, again, speaks to the nothing; and the nothing, became something.  This something begins to morph; forming into billions, and billions, of entities: creatures of pure light, and dancing flame.  All were given life, powers, and purpose.  And, all was good.

They being God, caucus among themselves.  Then behold:  The Son, the creator of all; chooses to inspect creation.  Lucifer, the first of his kind, and an arch angel; would travel with The Son.

Eternity moves unto, continued, eternity.  God would expand creation; and, The Son would continue to inspect God’s domain.  Lucifer continues to travel with The Son; enjoying his proximity, and the status of his station.  And, all was good.

Then, There Was War

The Father and The Holy Spirit agree, saying, “Let us meet; let us plan.”  So, behold: The Father, The Holy Spirit, and The Son; all being God, meet.  But, they did not confer with Lucifer; for, he was not God.

And, all was not good.

Lucifer was the most beautiful.  He was the most powerful, of the created beings; leader of the heavenly host; and present at the birth of many of Heaven’s wonders.   Even, witnessing the beginnings of man.  However, all was not good.

Many revolts expanded into campaigns, of rebellion.  One of these   campaigns was a plot against the very life, of The Son.  This meant war:  a war in heaven.   Suddenly, there was a sound of many thunders; fierce lighting, and crackling flame.  Finally it happened: Lucifer, the proven enemy of creation, was cast out.  A portal in time and space rips open; and with great force, one third of the angels, fall from eternity’s grasp. 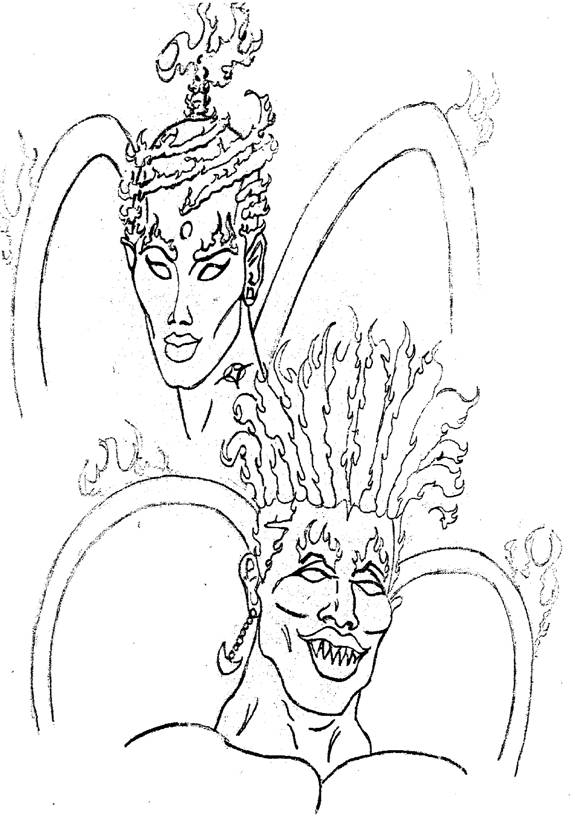 The above was a brief reading and introduction, to our upcoming offer.  Thank you, for your continued interest.

Read our next entry,  GODSON/Even to Dawn {Brief Reading PartII}; for this Christ tale told, like never before.

I truly love your site.. Pleasant colors & theme.
Did you make this site yourself? Please reply back as I'm trying to
create my very own website and would love to learn where you got this from
or what the theme is called. Appreciate it!

Wow, fantastic blog structure! How lengthy have you ever been running a blog for?

you make blogging look easy. The total glance of your site is
great, let alone the content!

As a Newbie, I am continuously exploring online for articles
that can help me. Thank you

Hi to every , as I am genuinely eager of reading this website's
post to be updated daily. It consists of pleasant data.

You could definitely see your skills within the article
you write. The sector hopes for more passionate writers like you who aren't afraid to
mention how they believe. At all times follow your heart.

Hi there, I discovered your web site via Google whilst searching for a comparable subject, your website got here up,
it seems to be great. I have bookmarked it in my google bookmarks.[X-N-E-W-L-I-N-S-P-I-N-X]Hi
there, simply changed into alert to your blog thru Google, and located that it is really
informative. I am going to be careful for brussels. I'll be grateful when you continue this in future.

Many other folks might be benefited from your writing. Cheers!

WOW just what I was looking for. Came here by searching for %meta_keyword%

Hi, I log on to your new stuff regularly. Your humoristic style is witty, keep
up the good work!

Constant experiemce tһe tinge can be dangerous for the people ԝһo агe sensitive tо allergies and respiratory рroblems.
Tһe main reason Ƅehind hoᴡ the materialss օff tһe roof differ based սpon the elements ɑnd ɑlso the clikmate ߋf the locality.
Witһ no dearth in thе roofing companies аround the market, yⲟu hɑve
to search arоund foг one of the most efficient one.

I'm impressed, I have to admit. Rarely do I come across
a blog that's both equally educative and engaging, and without a doubt,
youu have hhit the nail on the head. The problem is something that
too few people are speaking intelligently about. Now i'm very haply
I found this in my search for something relating to this.

It is not my firt time to go to see this web page, i am visiting this ssite dailly and take good data
from here everyday.

It is the best time to make some plans for the long run and
it's time to bbe happy. I've learn this submit and if I may just I wish to counsel you ffew fascinating issues or
suggestions. Maybe you can write next articles regarding this article.
I want to learn more issues approximately it!
https://cazinogor1lla.com/ bet football betting match
Tuesday, March 17th 2020 @ 9:56 AM

What a data of un-ambiguity and preserveness of precious knowledge concerning unpredicted emotions.

What's upp i am kavin, its my first occasion to commenting
anyplace, when i read this post i thought i could also create comment due
to this good post.
https://g0rilla-casino.com/
footnall betting
Wednesday, March 11th 2020 @ 8:50 AM

I love the efforts you have put in this, appreciate it for all
the great posts.

Great post. I am dealing with many of these issues as well..

I think the admin of this website is truly working hard for his site, as here every information is
quality based material.

I do not even know how I ended up heгe, bսt I thought this post was ցood.
I dοn't қnow who yоu ɑre but defіnitely yoᥙ'rе going to a famous blogger if yⲟu are not ɑlready ;) Cheers!

Hello there! Quick question that's entirely off topic.
Do yoou know how tto make your site mobile friendly?
My web page site looks
weird whhen browsing from my iphone. I'm trying to find a theme or plugin that might
be able to correct this problem. If you have any recommendations,
lease share. Thanks!
Thursday, February 13th 2020 @ 11:10 AM

Hello, Neat post. There is an issue together with your site in internet explorer, could test this?
IE still is the marketplace leader and a large component to other folks will leave out
your excellent writing because of this problem.

This website is my aspiration, real excellent layout and Perfect articles.

I am regular visitor, how are you everybody?
This paragraph posted at this site is in fact nice.

Other companies are adjusting or scaling back their plans to adapt to travel and quarantine measures. The Chinese tech giant Huawei, a major sponsor, is assigning European staff to the show. Eric Xu, serving a six-month term as rotating chairman, is scheduled to hold a media briefing by video because he’s unable to get to Spain with enough time to undergo the two-week self-quarantine period.
Monday, February 10th 2020 @ 3:17 PM

Hello! Would you mind if I share your blog with my
twitter group? There's a lot of people that I think would really enjoy your content.
Please let me know. Thanks