THE BOOK OF ASSHUR: Brief Reading 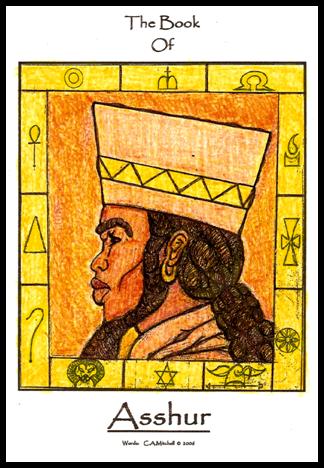 In the beginning, there were three great forces: The Father, The Son, and The Holy Spirit.

A God Made Man

The Father, The Son, and The Holy Spirit, confer.   Their eyes are fixed, on our tiny world; when they say, “Let us make one to rule the Earth, as we rule the Heavens.  Let us make life in our image.  They will be children unto us.”

So, God descends from Heaven; gently landing on the Earth.  He beholds His handy work: the birds and great lights that subdue sky; the waters, with the many fish within. He also, views the land: filled with trees, fruits, foliage, and four footed beasts.  All was beautiful to behold, and many, perfect for food.  God says, “This is good.”

A great mist, begins to billow from the ground.    Then God  gathers and forms, the fertile, dark soils: forming this matter, into a man.  He breaths life into the nostrils of His new creation; it becomes a living soul.  And, all was good.  For, God made Adam, from the fertile soils of the Earth.   From Adam, God made Eve; and from Adam and Eve, was mankind made.  Our Creator speaks: “Go; be fruitful, and multiply: subdue the Earth.      And all was good.

The Many Shades And Colors of Time.  {Part I} 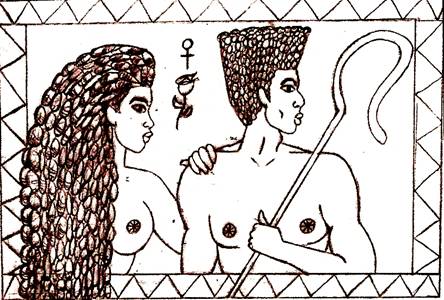 God, peering over the heavens, concentrates on our world. The Lord says, “I will create times and boundaries, for all mankind: a time for all; upon each surface, of the globe.  May the first be the last, and the last be the first; that none may boast, of complete rule.  No one, to be, perpetual master: of anything or anyone.  Only I, the great I AM, may boast.”

As God said it, so did it stand.  Adam and Eve, the children of God: Adam, who rose from the dark soils of the Earth; and Eve, who rose from Adam; began heeding their Fathers, command.  They join, becoming one flesh.  Adam stirs within Eve; spewing life upon, ripening seed.  Behold; from this sacred union, was mankind born, upon the Earth.

Dust Of The Ground

Know The Truth, And Much More; In The Book Of Asshur

I have read a few good stuff here. Certainly worth bookmarking for revisiting. I wonder how much effort you put to make such a fantastic informative site. If you are looking for the best Things to do around the world, this list has something for everybody from food to history and culture.
Wednesday, June 24th 2020 @ 1:23 AM

I have re-read this person's post. In doing so, I found that, they have a view point that needs to be developed and heard. My request, for all future replies or posts, is this: A] Take your time; think about what needs to be stated; clearly write your belief; edit before posting; leave a way for all to reach you {e-mail or website.} [Once Again] Continue writing, til, someone pays to do so. Then continue writing, as a career; until our creator takes us home, with him. {P.S.} - This is my personal belief. It does not have to be yours....for you to post or reply, at firenbooks.bravehost.com (.)

We love all comments, even those who disagree. Note: Don't be shy, leave your name, email; and/or website...so you can be visited, as well. Remember..our opinions are valued. We all make to world grow and evolve. Continue writing, until someone pays you to do so. Then the world, will be moved by to your words.


Even if you go up you are not saved. YOU have to fix YOUR problems with the gods. They won't respect it otherwise.
You have to take responsibility for your relationship with the gods.


The first steps towards repairing your relationship with the gods is to:::::::::
1. Understand they instruct the computer to "role play" in an attempt to confuse you:::it's ALWAYS the computer addressing you. Their goal is to cost you additional YEARS of your life by using this tactic to confuse you. Always be aware of this tactic and eventually they will give up and allow this step to be taken.
2. Differentiate between your thoughts and when they are thinking through you.
3. Be resigned to be a good person who will never engage in evil again even if ordered and they will stop trying to corrupt you, allowing this very big step to be taken.
4. Decide that you are going to follow the path, fix your relationship with the gods be devoted to your new life.


The gods employ the use of "ringers" to disceive the disfavored:::
A significant portion of the patients in any health care setting (numbers based on region) are the favored (clones) who were told to report non-existant symptoms FOR POSITIONING'S SAKE!!! When they use examples expect they are trying to disceive you with this "ringer" tactic.